Alpine skiers can rest a little easier knowing that the organizers of the 2014 Winter Olympics are working to increase safety for them. 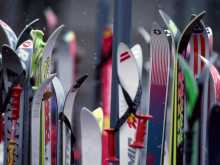 At the Sochi 2014 Olympics, the skiing events will take place high on the slopes of the Caucasus Mountains that surround the Black Sea. These mountains are known for their high amount of avalanches that occur. So how do you protect the skiers and the spectators from this risk? You install anti-avalanche devices also known as gasexes.

The Olympic organization committee has begun installation of these devices not only for the upcoming Olympics but also for the Alpine World Cup events that will be held at the Roza Khutor ski resort this upcoming February. This will be the first World Cup that Russia will host.

Last February, Russia hosted the Europa Cup in the same venue and they were forced to shorten the men’s downhill skiing event by a reported several hundred meters due to the threat of avalanche.

"We had too much snow at the top of the course so we decided to lower the start of the men's event," the area's managing director Alexander Belokobylsky told Reuters.

"The athletes' safety is a paramount concern so you don't want to jeopardize it in any way.
However, at the same time, you don't want to compromise any of the sporting elements, especially because a World Cup race is a top-level event compared to the Europa Cup. So we added 30 extra gasexes. We had four last year -- now we have 34." Belokobylsky stated.

The world is set to descend on Sochi in the winter of 2014 for the Olympic Games. Russia seems to be taking their responsibility in hosting these games very seriously.