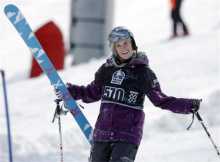 Canada’s golden girl of freeskiing is in critical condition in a hospital in Salt Lake City Utah after an accident on the slopes in Park City Utah.

Sarah Burke was training on the slopes near Park City Utah when she suffered an accident that caused a serious head injury according to the Toronto Star. Some reports say that the double defending gold medalist in the Winter X-games had to be resuscitated by medical personal before she was transported to the hospital where she is listed in critical condition and in a coma.

The website, Powder.com, is reporting that according to a witness, the 29-year-old “whiplashed” over on her side just after she landed a trick off a wall at the bottom of the resorts superpipe.

Burke is the daughter of ski racers and grew up in Midland Ont. Currently she lives with her husband in Squamish, B.C. Burke is considered a pioneer of her sport often competing with men because there were no women’s events to participate.

Burke is married to fellow pro-star Rory Bushfield. Burke played a critical role in getting the slopestyle event added to the 2014 games and is expected to garner gold medals at the winter games in Russia.

“She’s kind of been the face of the sport and technically pushed the sport on the front end,” said Judge. “She wouldn’t sit on her laurels. She always pushed it to the next level and defined herself on what she could do, not measuring herself by others around her.”

She took her roll seriously and she knew there was a price to pay. In an interview with Vancouver Magazine, she had this to say:

“Broken hands, ribs, nose. Torn-up knees. I’ve knocked myself out a few times. And my shoulder kept popping out, so I had to have surgery. The worst was at the X Games in Aspen. It was a snowy day, really slow. I didn’t get up enough speed and landed short on a 75-foot jump. I broke my L3 on impact. So, yeah, I’ve had my share.”


No Cheaters allowed at the 2012 London Olympics